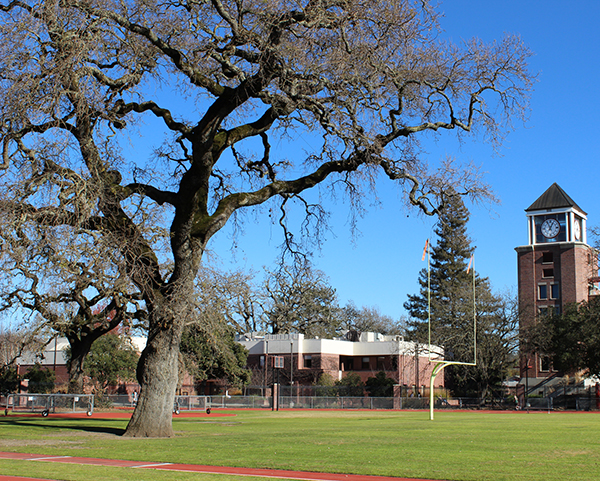 As of July, 1996, we were growing more than 1,400 trees consisting of about 400 species on the main campus grounds alone. In addition, on the Petaluma grounds there are 450 newly planted trees and on the Windsor grounds there are 230 trees.

Several years ago, we completed an inventory of all of the trees on campus. This computerized data base gives us information on the species name, location, size, overall health, and current recommended maintenance. We have also created a digitized map of the campus with coded labels locating the trees. We hope to incorporate this technology into a more efficient preventative maintenance program for our campus trees. This information has already proved useful for several instructors on campus, thus expanding the learning laboratory to the campus grounds. A lengthy Overview on Oak Tree Maintenanceis provided below for those individuals who are interested.

An Overview of Oak Tree Maintenance

The City of Santa Rosa is located in a large valley that was once home to countless Valley Oaks (Quercus lobata). The land where the Santa Rosa campus is located was no doubt originally a vast “forest” of Valley Oaks. As a result of the growth of the campus and the construction of many buildings, our heritage oaks dwindled to a population of approximately 120 of the largest oaks on the grounds that were assumed to be older than 250 years. In many instances, these oaks have been affected by over-irrigation, over-grading, and too much trenching within the root zone. As a result, in 1984, concern was mounting regarding the long-term health of these stately old monarchs of our campus.

One of the many conditions affecting our oaks was soil and root fungi enhanced by lawn irrigation. In 1984/85, the Grounds Dept. collaborated with the Sonoma County Farm Advisor in an experiment to control parasitic fungi that inhabited the local soils. The effects of our different fungicidal sprays over a period of two years were negligible compared to our control group. So, it was decided to discontinue the use of fungicides.

In the meantime, we had begun to implement some mechanical controls for root crown rot (described below) on most of the older more susceptible Valley Oaks on campus. We had learned what conditions the harmful fungi needed in order to become prolific. First of all, they needed a fairly constant source of moisture, secondly, warm temperatures (around 69 degrees Fahrenheit or better), thirdly, a food source (the plants), and fourth, oxygen. Minus any one of these factors, and the fungus would lay dormant, and thus harmless. We started by focusing on parts of the landscaping around our oaks where irrigation was applied to the base of the trees in order to grow turf. Our solution was to cap off irrigation heads wherever possible to stop water from hitting the tree trunks. In many cases, we were able to remove irrigation and turf out to the drip-line of these oaks.

We studied the past grading practices around our oaks and found through root crown excavations that there were many cases where the grade was raised around the base of the trees, holding in the moisture at the root crowns, creating an ideal habitat for armillaria root rot. A root crown excavation is a procedure that entails removing the soil from around the root crown area, painstakingly scraping the fungus away, and bark tracing the infected and wounded areas. If the root crown excavation was very deep, we had to then construct a metal grate to cover the excavation to prevent people from tripping in the trench that we had created. Fungus was only one of the problems we were faced with in our caring for our older oaks. The extremely old age of some of our trees, and the damage from construction projects were two other major worries.

A separate budget was created to allow us to put 120 of the oldest oak trees on a 5-year maintenance cycle that included every procedure necessary to keep them as safe and healthy as possible. The District also saw fit to expand the staffing in Grounds to include a Certified Arborist who oversees all of the trees and serves as an inspector for the group of older, larger oaks that are maintained yearly under contract. That maintenance involves removing deadwood, and thinning out foliage toward the ends of the branches to reduce the leverage of the weight, and to reduce the wind-sail effect. Sometimes limbs are cabled together so as to act as a unit in wind movement. The root crowns are inspected and cleaned if necessary, and the limb structure is inspected. Several of our old oaks have had vertical bracing installed. The technique of vertical mulching (drilling holes in the soil to improve aeration and drainage has been employed in some situations. Other trees have had organic mulch applied under the drip-line of their canopies. This procedure minimizes compaction in the root zone, and provides nutrients to the tree as it decomposes.

Construction damage to trees, it seems, cannot be completely circumvented, but we have gone to great lengths to minimize it. The most serious damage to trees caused by construction is underground. The root system of a tree may spread horizontally a distance much greater than the height of the tree, and so it is vulnerable to compaction by equipment, and to being severed by grading and trenching. A Board level policy now requires the presence of a certified arborist to monitor projects that encroach on the root zone of our more stately heritage trees, and to make recommendations regarding possible construction alternatives. Several construction projects have had to be redesigned in an effort to minimize root damage. When the cooling tower for Doyle Student Center had to be upgraded, relocation was required to lessen the damage to the tree next to it. Communication lines to the Pedroncelli Center were re-routed in order to minimize damage by trenching. In another instance the floor was raised on the Building and Grounds office addition in favor of the trees roots.

Departments Outside of Facilities Operations:

Responsible for surplus; tables and chair requests (10 advance notice)
Round tables are not available.
707-521-7964